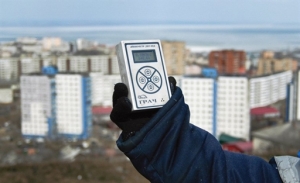 A meteorologist holds a dosimeter, showing radiation levels in the Russian Far East city of Vladivostok on March 14, 2011. Russian authorities reported normal radiation levels in the country’s Far East on March 14 and said there was no reason to evacuate residents following a second explosion at a Japanese nuclear plant. A new explosion at a nuclear plant hit punch-drunk Japan on March 14 as it raced to avert a reactor meltdown after a quake-tsunami disaster that is feared to have killed more than 10,000 people. AFP PHOTO / GENNADY SHISHKIN